The White House fiscal year 2012 budget request incorporates a freeze through fiscal year 2012 for “non-security” discretionary appropriations that would reduce such spending by more than $400 billion over 10 years. Overall federal outlays would decline under this assumption from 24 percent of gross domestic product in 2012. 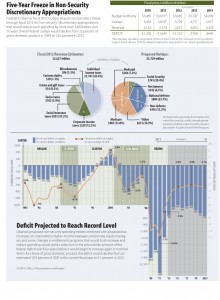 This entry was posted in New at Brody. Bookmark the permalink.