The Federal Budget – Spending vs. Revenue

As Congress returns in January, the challenge remains as to how to properly 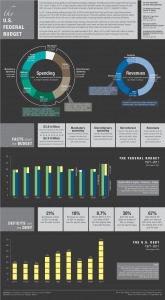 manage spending v. revenues. The Administration will release its fiscal year 2013 Budget in February to kick off the annual Appropriations season on Capitol Hill. The debate however remains unresolved. The United States is facing significant budgetary challenges. The federal government’s budget deficit for fiscal year 2011 was $1.3 trillion; at 8.7% of gross domestic product (GDP), that deficit was the third-largest shortfall in the past 40 years.  This chart from the CBO is a nice narrative of our spending vs. revenue condition.

This entry was posted in Uncategorized. Bookmark the permalink.